Just placed another order. Thought I'd share the new engine kits I made for this stealth jet. :) War of the Worlds model

"I just have a small momentary, micro switch between the 9 volt battery
and the orange blinking LED that I put in the base of the clear plastic beam.
I put the movie on my surround system and "kinda" hit the switch to the saucer's firing.
It wasn't spot on but if I tried harder (lol) I could match it up I'm sure.
It is strange that the "blinking" orange led actually responds to the contact switch like that.
I discovered it while just playing with the battery during testing.
The red blinking LED I bought won't respond like that. So I admit I'm puzzled.

You know...I think the random blinking green lights are going to actually work better
than the "Voodoo Kit" I bought for the larger saucer!
There is an IC in the kit with normal LED's and I assume they will all blink at the same time.
Don't know yet...as it is my next project.

After that...I'm going to build "The Witch". I'm going to use a bunch of 1.8mm blinking orange
and one blinking red to mount into the base of the fire under the witches Pot to make it look more real.
Maybe some green inside the glow in the dark witch...we'll see. I'll send a video of that...
it'll be a few months off.

I'll be surely ordering more lites for more models as this is way too fun!" 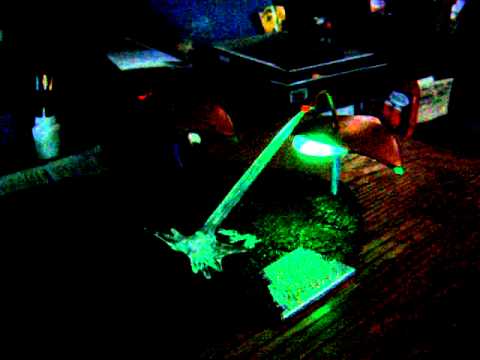 R2-D2 in a space fighter

Star Wars X-Wing with R2-D2 in the back "A photo of my helipad for small RC helicopters with 5mm Cool white leds I purchased from you." Here are a couple of RC Helicopter photos (red civilian helicopter and tan Marine Helicopter).
They show the 3 strobes, 2 navagation lights, landing light and a taxi flashing red
on the belly of the military (tan) helicopter. LED Helicopter Lights.
This great Photo of a Life Flight Landing to make a rescue in a Busy G scale Model Train Layout
was sent to us by Bob Dickey, owner of the "Dewey, Cheatum and Howe RR" from Sherwood Oregon.
Bob installs our LEDs in RC Helicopters! Enterprise over the planet War of the Worlds

Thank you for making it so easy to add LED lights to my War of the Worlds Martian War Machine.
I added (8) - 3mm 5-13 Volt DC Green LED Lights.
(1) 3mm 5-13 Volt DC Red Normal Flash Rate LED.
(1) 9 Volt battery strap w/switch.
This model turned out awsome!
Thanks to Anton Cacciamani for the Great pictures! 1.8mm LEDs and a 3 volt coin cell really make the difference in this television star robot!